A 15 minute car drive over a road through the forests and farmland,  brings me from my home in Lochem to Zutphen,  a town situated at the confluence of the rivers IJssel and Berkel. Until now, I only visited Zutphen two or three times, but for sure I will return to this town, full of culture and history, many more times in the future. .

Founded in the 11th century as Zuidveen (Southern peat bog). In 1312 it was fortified and became a member of the Hanseatic League. Zutphen was occupied by the French, the Spanish and during WW2 by the Germans.

There are still quite some medieval fortifications like the Nieuwe stadspoort (gate), the Drogenapstoren (tower) and the ruined Berkel gate. In the St.Walburga’s church you can find the Public Library. Definitely worth a visit. If I would live here, I probably would visit the library a few times a week! Other places of interest are The Wine House Tower, the Town Hall and the Butter and Meat Halls (Markets).

If you like shopping, there is a variety of stores with second hand or new stuff and sometimes funny displays in the windows!

During the Heritage days, the second weekend in September, when many monuments open their doors in the Netherlands (free of charge), I got just a glimpse of a few of those historic buildings.

As in Lochem, also here you can go for a tour with a “whisper boat” along the river Berkel. It gives you a totally different view on the town and it is a nice break after a few hours of hiking!

Zutphen also organizes many festivities. From now on I have to keep my eye on their cultural website and newspaper. One of those events was the  ”Art along the IJssel” and ”Brocante Market”. It took place on the last weekend of August and the temperature was good enough to give the children (and  one grandfather) some fun time in the fountain! 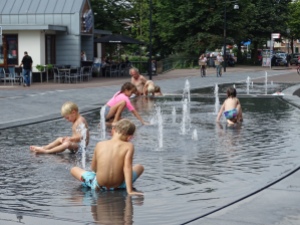 I gave myself a day off to discover a bit more of this vibrant town. A variety of Art was displayed along the river, from paintings and ceramics to glass objects and pictures. From the river you walked along the Brocante stalls into town. There was music, mostly French tunes and people filled the many terraces around the Wine House Tower and the inner streets.

I used the day to take pictures instead of buying things. My house doesn’t need more decorations, so the camera let me concentrate on other things……..

This site uses Akismet to reduce spam. Learn how your comment data is processed.