On the 22nd of June, I leave Portugal and fly to the Netherlands, where I stay in my hometown for a couple of days and after, in a cottage in the woods in IJhorst, close to Staphorst, to get some quiet time and work on my blog. After a lot of internet issues in the cottage, I got the opportunity of the owner of the Holiday Park “The Vossenburcht”, to work in a cottage, where the internet indeed was working. In between shopping for my next trip to Costa Rica and computer work, I had a little bit of time to explore the beautiful area of IJhorst. A peaceful area with all kind of landscapes; farmland with the typical farmhouses for this area, woodland, small rivers, little villages and great walking and biking tracks.

I wished I had more time for leisuring, but halfway the week, I got two affirmations of house sitters jobs and from that moment on, the organizing started. One house sit will be in Merida, Mexico and it will be right after Costa Rica. The other one will be for the whole month of September and is in Canmore, the Rocky Mountains, Canada, very close to where my son is living. It means that my plans to go to Panama will have to wait, but Merida was already for a while on my “to see list”, so it all works out great! The “travel agency” starts making overtime, as flights have to be arranged and especially in between Costa Rica and Merida it takes some investigation. I finally end up with a flight from San Jose to Mexico City and then to Merida with Aero Mexico. 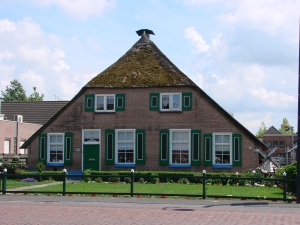 In between the organizing, I visited the village of Staphorst, where all the farmhouses are painted with the same colors of green and blue and where many still are dressed in the typical Staphorster Costume. A very neat, clean and religious village, where on Saturdays everybody is working in the garden or washing the windows, as Sunday is a day of complete rest and time for church. I encounter a second hand store with, among other things, a lot of the Staphorster clothing. 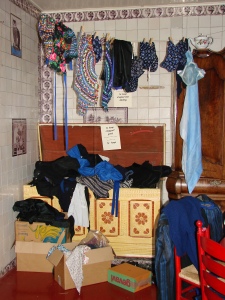 It is in this area where they should have traffic signs with a warning for “crossing Storks”, as there are so many everywhere and I had one right in front of my car. The Stork was in no hurry and proudly crossed the road slowly, step by step……….

Although this week was meant for complete rest, it turned out a little bit different, but I still enjoyed the complete different surroundings and the nice and helpful people in this area of the Netherlands. I hope to be back in the near future…….. 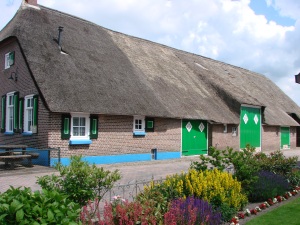 From the 1st until the 3rd of July, I spent two nights at Toronto airport and again spent my time with mailing references and following up with home owners. Early morning on the 3rd, I travel to Liberia, Costa Rica, for a Retreat sit in the jungle. I have had extensive contact with the owner, a Finnish lady and I think we will get along in the first two days, that we will be together.