After spending two nights in my “old” house in Gorgoes, Portugal and seeing Pasha, the dog again, it is time to deliver my rental car back at the airport. I got very attached to Portugal and I have mixed feelings of going back to Ontario, Canada, although it will be for just one month. I was very lucky that two of my friends in Pelham town needed me, each for around two weeks. That gives me time to visit my dr. and my dentist and some other commitments I have. Also, I get to see some of my friends and who knows, when I will see them again..

The first two weeks I am taking care of a very sweet Labrador, called Libby and a cat, named Bruce. There is still snow, but now in March the sun is getting stronger and I even get to sit outside on the sheltered patio, with a thick sweater on. I never took care of a Lab, but what a joy it is, so much fun with this dog! The two weeks are gone in no time and I just go straight from one house to the other. I took care of the cats of my other friend before and after a few hours, they seem to recognize me again and we all get along again great! While in the first two weeks I had a car, during the last two weeks I don’t have a car, so I am more housebound. I do see a few more friends and have time to work on my blog and try to get a house sitting schedule going, for the next few months. I notice, I am not feeling attached to my old village any more and I am looking forward to my new future, wherever it may be. On the 3rd of April, I am flying to the Netherlands again, via London, with British Airways. This is the second time I am taking this route and it works out way cheaper than with other flight carriers. In the Netherlands I will stay for around 6 weeks in the same house in Julianadorp, where I stayed before. 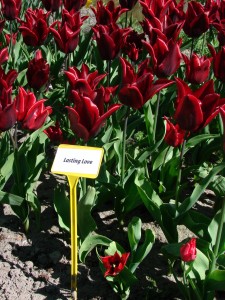 Right on time to see the explosion of flowers, as this area in “North Holland” is well-known for its bulb fields. I am very lucky, as the weather is often superb for cycling and the cycling paths through the dunes along the sea, gives you also a magnificent view over the colourful landscape. I visit the “Flower Days” in Anna Paulowna, where many houses have displays in their garden of a “flower mosaic”, which must be so much work to get accomplished! Works of art indeed!

I also go with a friend on the bike to the island of Texel. I have never visited that island and it is fun to go with your bike on board of the ferry, which only takes around 15 minutes or so. Texel is surprisingly beautiful, with great cycling trails through agriculture land, small picturesque villages, woodland and dunes.

We visit the Cheese market of Alkmaar, also a big tourist attraction and for me the first time to witness it. The 6 weeks go very fast, as the weather is inviting to go out and explore and after so many years living in other countries, I enjoy being in my home land. On the 18th of May, I will leave again and go back to Portugal for a house sit on the West coast of the Algarve.

Back in the Netherlands after three years of absence. So good to be surrounded by family, friends and even renewed friendships from 35 years ago. The first ten days I spent at my sister’s place, a small village behind the dunes, bordering the North Sea. A lovely area to go for a walk on the beach or taking the bike and use the beautiful assigned bike tracks along the sea shore. I was treated with a lot of sunny days and going out helped me to clear the mind. During the three weeks I stayed in my home country, I travelled in all directions. From the sea in the West, to the forest and moors in the East, visited the charming town of Alkmaar and my birthplace Amersfoort. Enjoyed my stay in Leiden, a town where I lived and worked for 7 years and although the town is rapidly growing, the centre still has it’s charm. I even spent a day touring through the city of Rotterdam, which impressed me with it’s diversity of buildings, neighbourhoods and waterways. The weeks were gone in no time, with so many people to see, so many good chats, the laughter and yes, also the tears.

Three weeks of packing and unpacking and now I was ready for my first house sitters job in the Algarve, Portugal.