It has been a while since I packed my bags. Nearly 4 months I have been at home and that hasn’t happened for at least 10 years. This time my trip is a bit unexpected and a combination of business, holiday and meeting my son again after 11 months. He is flying in from Canada and I come from Europe and we will meet on the Northern shores of the Dominican Republic. A welcome distraction, as my “travelling ache” flares up and the adventure calls. 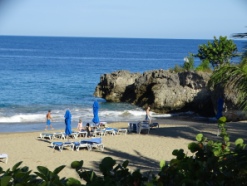 It has been 3 years ago that I was last in Cabarete and although I didn’t miss it, it feels like coming home. I booked an all-inclusive in Sosua, as that was the best deal I could find, while my son stays with friends in Cabarete. Years ago, he lived there for 7 months and many of his friends return for the warm winter months, while Canada is covered with snow. Although I am used to the all-inclusive hotels, this one is huge and with 1500 people fully booked. The quiet room I requested turns out to be in the noisiest corridor there is. So glad I brought my earplugs and sleeping pills! I will need them in the coming two weeks! My experience is, that arriving people always tend to get drunk the first night. Probably, as they are so relieved to arrive safely? As this hotel is occupied by people from all over the world, there are everyday new tourists arriving, which means every day groups of drunken people…….I am mostly gone during the day, but I prefer to stay after dark in the hotel. I never had to speak so many different languages during those long evenings. It is tiring! I wished the wife of that french guy didn’t go to bed so early, so he would leave me alone, but for whatever reason he always finds me. French people don’t speak any other languages, so I have to take an extra “Cuba Libre”, as then my french is floating out of my mouth. To the staff I speak Spanish, of course English with the many Canadians and then I meet this nice German guy and suddenly my German has to be refreshed with some more “Cuba Libre”. This they call a holiday??? I have the feeling that I am doing a Summer School!

I will see my son regularly during these two weeks. He spoils me on my birthday. I take a taxi from Sosua to Cabarete (never pay the price they ask!) and get my late morning Mojito (my favorite drink since I ever set foot in Cuba), on the beautiful beach of Cabarete. What a way to start the afternoon! Here you can sit with your feet in the sand and watch the waves and the first kite boarders in the sea.

My son has more surprises for the afternoon and at 4.00 p.m. he collects me from the spa resort, after massage, pedicure and manicure (wow, does that feel good!) and I have to climb on his “moto” to go to the next venue on the cliffs. I always promised myself never ever to sit on a motorcycle again (after an accident), but this is the third time I don’t keep my promise. Very relieved we reached our destination safely!

Another surprise is the fabulous view from an upscale resort, where we have some more drinks and tasteful appetizers with some other friends of my son. After, we walk to a simple, but favorite food place, where the Spanish owner makes the best paella. What a great way to end my birthday.

Sosua by night is something I try to avoid, unless you are in a group and in need of a change from the food the hotel offers. Plenty of restaurants and bars outside the resort, but also plenty of very young prostitutes with mainly older guys. During the day a nice little town with a small beach full of shacks, where you can buy all kinds of paintings, ceramics and clothes. During the night, the beach closes and downtown comes alive…..not my choice……

The two weeks are flying away, due to some business I have to attend. I am running around in between Sosua and Cabarete and have to admit that I prefer Cabarete by far above Sosua. I even get to go to Puerto Plata, which is transforming into quite a nice city, since a cruise ship terminal is built here. On one side still busy renovating and on the other side neat streets and squares.

A friend of my son arranges a beach day. A special tourist bus is booked and we are with a mixture of all kinds of nationalities and age groups. Our destination of the day is Playa Caleton at Rio San Juan. A nice secluded beach, great for swimming, relaxing and having fresh fish for lunch, served right on the beach! There are plenty of beaches, going in Southern direction, some of them very quiet and giving you the “Bounty island feeling”. Many years ago, I visited a few of those. Today is for sure a lazy day and our fun attraction is watching two dogs trying to catch a drone!

My last weekend is a long holiday weekend for the Dominican people, as Monday is Independence Day. I spent most of the day with my son and later we stroll over the very busy beach of Cabarete, where the kiteboarders are taking advantage of the wind and tourists are soaking up the warm weather. I am not ready to go home and enjoy for a couple of hours the music of a Dominican band with mostly Merengue and Bachata music. I get to dance with a guy, who dances amazingly well, but is also a little bit off……

Time to say goodbye, also from the french guy, who now has to find another victim for the evening. On the last morning, the parades for Independence day are passing our hotel in Sosua, while at the same moment rain starts pouring. I take my last pictures and prepare for a long flight.